This wonderful pie crust recipe came to us from one of our volunteers, Sharon Reavis Ward. We find this recipe will make two 8 or 9 inch crusts or one 10 inch deep dish crust with enough for a lattice top.

My grandmother, Nora Lee Reavis, was born in 1898 on a farm in North Carolina. There were ten children in the family, and she, being one of the oldest, was expected to help with the cooking . . . so she became one of the best.

When my grandparents were married, they moved to Indiana. As a child, walking into her big farmhouse kitchen was like walking into Heaven for me. She always had pies in the freezer, ready to put in the oven. Anytime anyone walked through the door she would lift the lid to that big old freezer to reveal pies whose fillings would have been grown and canned there on the farm. Grandfather and she worked side by side to fill the basement pantry. My heart is warmed just to think of her.

Break egg in a cup and beat with a fork. Add vinegar and water. 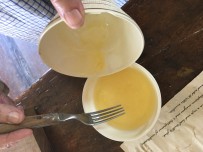 In mixing bowl, mix flour, salt and cut in lard. Mix wet ingredients to the dry. 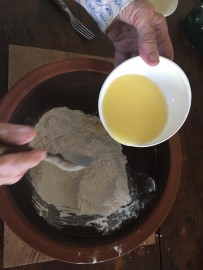 Knead lightly until a ball is formed and roll out to desired thickness. 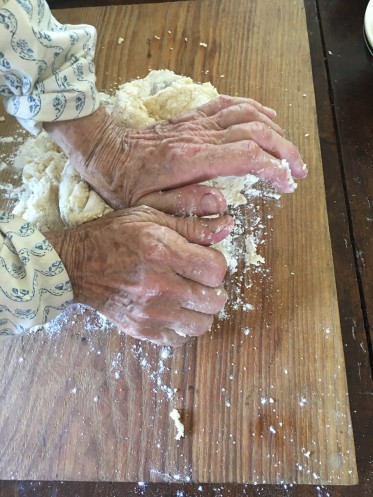 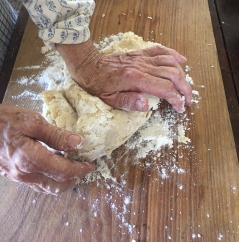 Knead dough lightly into a ball 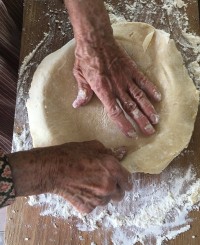 Fold under the outer edge. Flute edges as desired.

We grow Brandywine tomatoes in the kitchen garden at Venoge. They always come in late which coincides with our Rural Heritage Tour in the fall. Being aware of the somewhat out of the ordinary green tomato pie and having an excess of green tomatoes, it was a natural thing to try the recipe at the fall event.

In the past we have altered the recipe and used half apples and half tomatoes. The version pictured below, with a crumb topping, is by far our favorite. The ginger adds a unique flavor we hope you will enjoy!

Our recipe is adapted from America Eats by William Woys Weaver, food historian, author and gardener.

Skin tomatoes and slice as thin as possible. 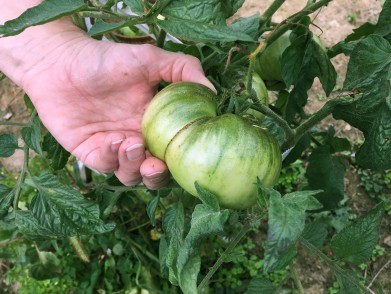 Line an 8 inch pie dish with pie crust. Fill crust, cover with a top crust, lattice or a crumb crust. Pierce the crust if you use a top crust. Bake in a medium oven at 350° about 1 hour.

Ready for topping or top crust

Place pie in the Baker

Pies cooking in the Baker

We like to serve these delightful little sweet treats at our Country Christmas get together each December. Our recipe is adapted from The Art of Cookery Made Plain and Easy by Hanna Glasse 1805.

Since we cook the doughnuts in small batches they are somewhat labor intensive, however a larger kettle could be used for the oil or lard. As soon as they are done, drain and roll in a sugar-cinnamon, powdered sugar or eat them plain. The crisp outer crust is fantastic.

Heat oil to about 375°F. We fill our kettle half full with oil and heat it over the hearth. 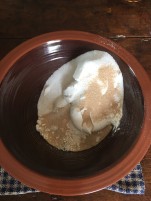 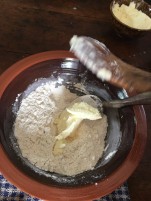 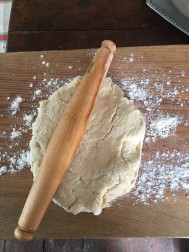 Cut the dough into shapes for frying 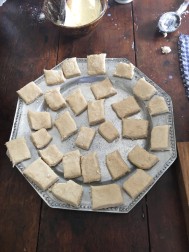 Let the doughnuts rise before frying

Drop a few carefully into the oil. The dough should sink to the bottom then quickly float to the top as it cooks.

Gently flip the doughnuts. These will cook quickly. Since oil temperatures will vary, cut one open to see if it is done and adjust cooking time accordingly. 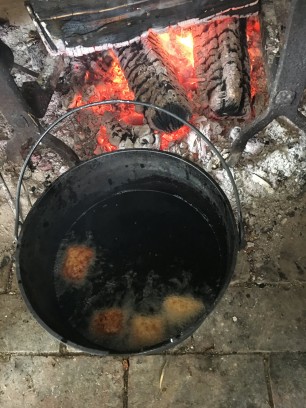 Doughnuts frying in kettle of lard

Roll in sugar or cinnamon sugar.

Make a good puff-paste, pare some large apples, cut them in quarters, and take out the cores very nicely; take a piece of crust, and roll it round enough for one apple; if they are big, they will not look pretty; so roll the crust round each apple, and make them round like a ball, with a little flour in your hand; have a pot of water boiling, take a clean cloth, dip it in the water and shake flour over it; tie each dumpling by itself, and put them in the water boiling, which keep boiling all the time; and if your crust is light and good, and the apples not too large, half an hour will boil them; but if the apples be large, they will take an hour’s boiling; when they are enough, take them up and lay them in a dish; throw fine sugar all over them, and send them to table; have good fresh butter melted in a cup, and fine beaten sugar in a saucer.

Peal and core apples. Fill the core with cinnamon and sugar. Prepare Grandmother Nora’s pie crust recipe and roll out the dough 3/8 inch thick. Cut the dough into 4 strips, one for each apple. Mold and shape the crust evenly around each filled apple so that the dumpling is sealed shut with dough. 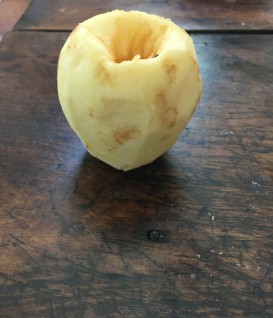 Next prepare the apples one at a time for the kettle.

For each apple, take a piece of cotton or linen which is large enough to wrap around the dumpling and dip the cloth into the boiling water, then flour the cloth. The flour creates a barrier around the apple and helps to seal in the flavor when the dumpling cooks. Wrap the floured cloth securely around each apple and tie it off tightly with strong kitchen twine. 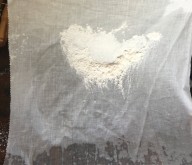 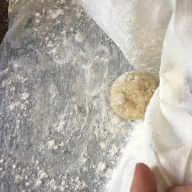 Flouring the wet cloth was easier when we laid the cloth flat on the table, poured a bit of flour along one side and then picked that side up and let the flour shimmy and cover the center of the cloth where the dumpling would be placed.

Using a loop of kitchen twine, suspend the apples from sturdy sticks or fireplace pokers in boiling water. Keep the water boiling.

Hang each dumpling from string in the kettle

The dumplings should cook in about 30 to 45 minutes depending on the size of the apples. Remove dumplings from the pot, cut open the tie and place on a plate to cool.

Dumplings just out of kettle

We topped our dumplings with melted butter and then drizzled cinnamon and honey on them.

Honey and Cinnamon on top of dumplings

Glasse, Hannah. The Art of Cookery Made Plain and Easy: the Revolutionary 1805 Classic. Dover Publications, 2015.

Adding molasses to the pumpkin filling gives this pie a distinctive flavor. It is easy to make and easy to eat. At one time molasses was the most popular sweetener in the United States. Refined sugar replaced it in popularity in the first part of the 20th century, mostly because of the cost. Molasses goes well with cinnamon and ginger (think ginger bread), both of which are used in this recipe. We use our own pumpkin grown at Venoge when possible.

Our recipe comes from The Williamsburg Art of Cookery Book, 6th printing. It comes from the Wicomico Church c 1829. 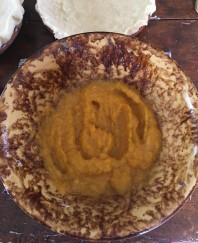 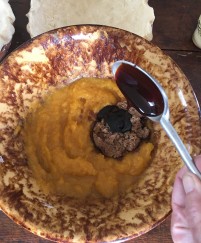 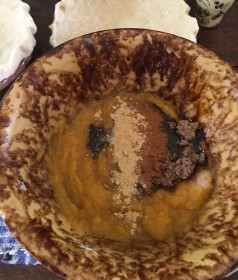 Pour into partially baked pie crusts and place in the Baker. 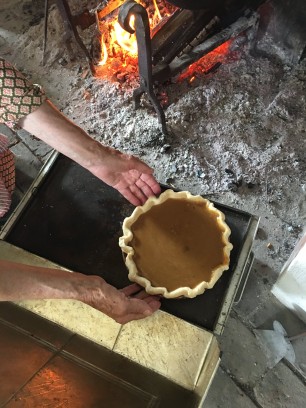 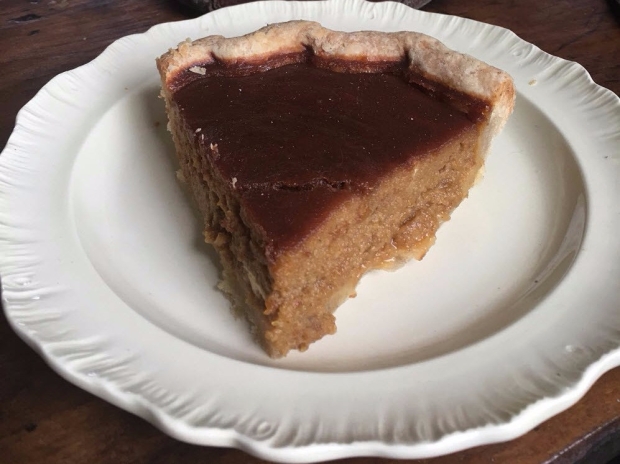 One of the most successful vegetables we grow in the Venoge kitchen garden are sweet potatoes. They are, of course, suitable and yummy in pies but we wanted to try using them in a recipe that could be made in front of visitors. We decided to try deep fried sweet potato fritters. Not only were they easy to make but they were fantastic and have a crunchy and tasty outer crust.

Heat oil to about 375°F. We fill our kettle half full with oil and heat it over the hearth.

Combine mashed sweet potatoes and egg in a small bowl. Set aside. In a medium bowl, combine the flour, cornmeal, cinnamon, nutmeg, salt and baking powder.

Add sweet potato mixture to dry ingredients and slowly add milk. Batter may be a little lumpy, but that is okay. 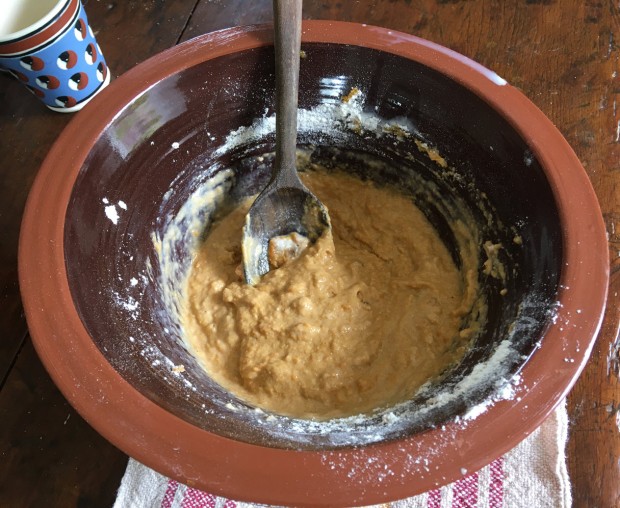 Mix wet and dry ingredients together

Carefully drop teaspoons of batter into hot oil. The batter should sink to the bottom then quickly float to the top as it cooks.

Gently flip the fritters in the oil so that both sides cook. These will cook quickly. Since oil temperatures will vary, cut one open to see if it is done and adjust cooking time accordingly.

While still warm, roll in the sugar and cinnamon mix.

Open one to see if done 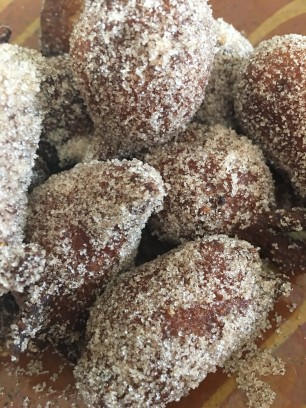 The name says it all, little bright spots of dough floating in a sea of dark oil. They fry nicely and taste lovely. We serve them as fast as they come out of the kettle.

Our recipe comes from The Williamsburg Art of Cookery Book, 6th printing. It was from Mrs. Cole’s recipe c. 1837.

Heat oil to about 375°F.  We fill our kettle half full with oil and heat it over the hearth.

Mix together egg, milk and sugar. Sift dry ingredients and mix into the wet ingredients. Mix in butter. 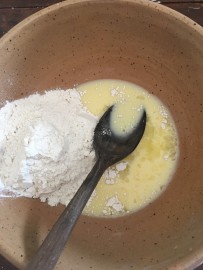 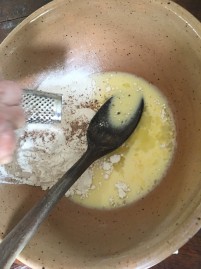 Carefully drop teaspoons of batter into hot oil. The batter should sink to the bottom then quickly float to the top as it cooks.

Gently flip the fritters in the oil so that both sides cook. These will cook quickly. Since oil temperatures will vary, cut one open to see if it is done and adjust cooking time accordingly.

While still warm, roll in in confectioner’s sugar or a cinnamon sugar mix. 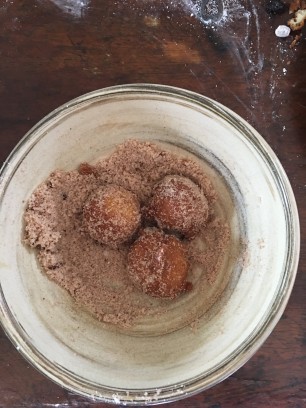 This quick bread is dark and rich and has a distinctly different texture from others.  Finding extra space in the bake oven, we quickly combined ingredients on hand and created this uniquely simple bread.  Searching for an appropriate name we went to the first known housewife in the Venoge cottage, Charlotte Golay Weaver.

Charlotte Golay Weaver was born in 1787 in Le Chenit, a municipality in the canton of Vaud, Switzerland.  She came to live in New York state where she met and married Jacob Weaver.  They arrived in Vevay, Indiana in 1813 and by 1814 settled in a house owned by her father, David Golay.  As Jacob Weaver would write in a letter to his father in New York, Charlotte and Jacob lived “close to his door”.  We suspect Charlotte was the first to cook in the kitchen at Venoge. Charlotte, we remember you. 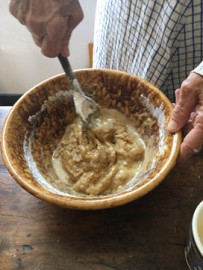 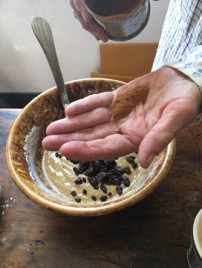 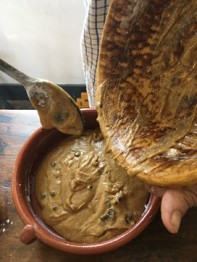 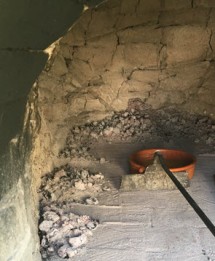 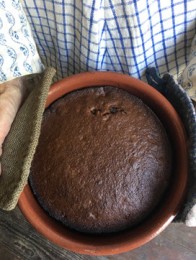 Serve when cooled with fresh butter.